Remember back in March when Andy and I built our worm composting bin??  Well, here is a delayed update for you:  it failed.  We had bought the wrong worms.  Who knew that worms differed so much!  In my eyes, worms are worms.  Anyhow,  it only took me 7 months to correct the problem.

Today I received my special delivery: 1lb of RED WIGGLER WORMS (write that down).  It was hard to spend the $30 for them considering I'm a cheap ass, but it was from a Wisconsin farm so I tried to justify it.
I was a bit rusty on the whole worm bin thing, but I went back to my old post to refresh myself and put the bin back in working order in no time.

Do you have a worm bin? 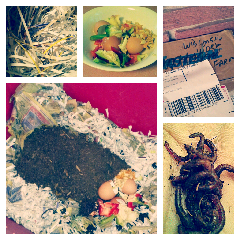 Lindsay
I'm a wife and mother. My husband and I are trying to make a homestead out of our home in the city. This is to document the various adventures which may involve us, our children and our attempts at homesteading. It is pretty much assumed tales to be told on here will be filled with chaos, successes, failures, laughter, and most importantly love. Enjoy!